DJ PRINCE-J ENTERTAINMENT WORLDWIDE
Add Comment
News
The Minister of Information and Culture, Alhaji Lai Mohammed, has said that the video of him begging Nigerians to forgive President Buhari over his WAEC results was “doctored”, Igbere TV reports.
Igbere TV reports that Mohammed came under attack on Friday, after a video where he was pleading with Nigerians to forgive the President over his controversial documents, surfaced online.
“Nigerians should please, pardon President Buhari over his (WAEC) certificate, he doesn’t know where he kept it, it’s been over 53 years now since he finished secondary education”, Minister Lai said in the video sighted by Igbere TV, weekend.
But reacting to the trends in a statement obtained by Igbere TV on Saturday, the minister said “the video was doctored making it look like” he was “begging Nigerians to forgive the president.”

”A pattern is emerging of the antics of the desperate opposition to latch on to the use of fake news and disinformation as a strategy to trigger chaos in the country.
“On Friday (6 Sept 2019), they doctored and circulated the video of my appearance on Channels Television on January 2015 (when I was the spokesman of the APC) to make it look like I was begging Nigerians to forgive President Buhari for not having a school certificate.
“Worse still, they posted the video afresh, giving the impression it happened last Thursday and that I acted in my capacity as Minister of Information and Culture.
”Unfortunately for them, this doctored video came out on the same day a report emerged that the PDP had sent lawyers and party agents to the University of Cambridge to confirm the authenticity of the President’s West African school certificate, only to be stunned to discover that not only did the President write the examination, he also passed.
“One would have expected a party that trumpets its belief in the rule of law, a party that challenged the result of the last presidential election in court, to wait patiently for the impending judgment on the issue instead of engaging in underhand tactics and resorting to self-help.
”This is just the beginning. Nigerians should expect an explosion of fake news and disinformation in the days and weeks ahead. This is because the desperation of this opposition is alarming. But their strategy will fail, just like every other dubious strategy that they have been employing in their desperate bid to grab power.” 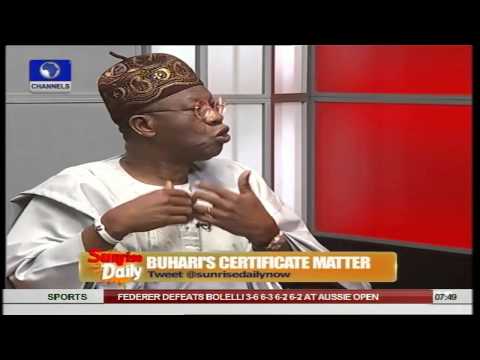