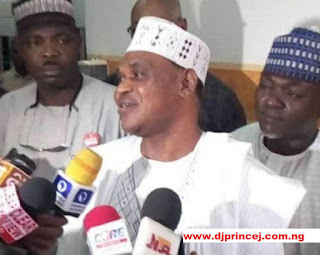 The Peoples Democratic Party’s (PDP) candidate for November governorship election, Engineer Musa Wada has slammed the State House of Assembly for their role in the purported impeachment of Elder Simon Achuba as deputy governor, describing their decision as shameful, illegal and undemocratic.
Wada, in a statement signed by the Deputy Director, Public Communications Committee of the PDP Campaign Council, Austin Okai condemned the action of the State lawmakers for setting aside the report of the panel that investigated the allegations leveled against Achuba.
The governorship candidate said despite that the panel report exonerated Achuba of any wrongdoing, the lawmakers still went ahead to do the biddings of their pay master which according to him further confirmed the opinion of citizens that “they are an assemblage of rubber stamp legislators”.
“This is a complete miscarriage of justice even as the administration of Yahaya Bello pre-empted the removal of the Deputy Governor, Simon Achuba.
“The purported impeachment is unacceptable, illegal, immodest, null and void. The decision is a complete departure from the recommendation of the panel that investigated the allegations,” he said.
Wada warned the state government not to swear in or dare to replace the current Deputy Governor, Simon Achuba, as it will amount to wanton political profligacy on the part of the state leadership.
He wondered why the haphazard decision of the state government came on Friday and the plan to swear in the governor’s former Chief of Staff, Edward Onoja, as Achuba’s replacement.
Wada warned the state government not to overheat the polity or create any form of political crises that will affect the smooth transition in the state after November election.
He urged PDP supporters to remain calm and observe the drama that is playing out with a resolute determination to, “weed out the current anti-people’s government of APC under Yahaya Bello.”
Meanwhile, Chief Edward Onoja, the running mate to governor Yahaya Bello for the November 16 governorship election is to be sworn in on Monday as the new deputy governor of Kogi State.
DAILY POST earlier reported that, the deputy governorship candidate was scheduled to appear before the seventh Kogi State House of Assembly on Saturday 19th October, 2019 for his screening by the 25 lawmakers.
Onoja was the former Chief of Staff to governor Yahaya Bello before he was appointed as running mate to the governor for the coming governorship election and based on this, he resigned as Chief of Staff to the governor last week.
DAILY POST reliably gathered on Saturday that the Kogi State House of Assembly will screen him on Monday, 21st October, 2019 and after the screening, the house will then confirmed him as deputy governor of the state before proceeding to Lugard House to take an oath of office which the Chief Judge of the state Justice Nasiru Ajanah is expected to administer.