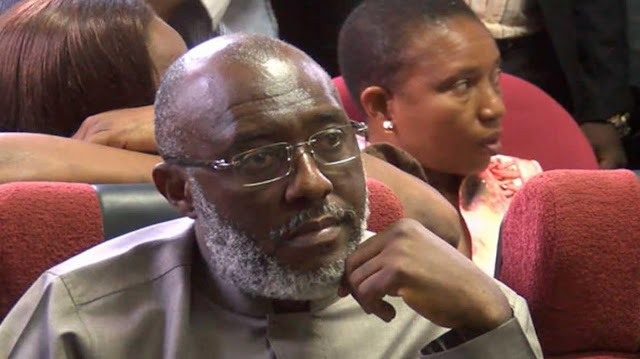 An FCT High Court, Maitama, on Wednesday fixed Jan. 27, 2020 for the hearing of a case against Olisa Metuh, a former PDP spokesman, charged with criminal destruction of evidence to open his defence.
Metuh was arraigned alongside his company, Desita by the Economic and Financial Crimes Commission (EFCC ) in January 2015 on a two-count charge bordering on alleged destruction of evidence.
The case slated for the commencement of defence on Wednesday was further adjourned at the instance of the court.
NAN reports that the council on the matter were all present, the defendant, Metuh was also present but the court did not sit and date was agreed on by all the parties.
Justice Ishaq Bello, on Oct. 17, in his ruling on the no-case- submission filed by Metuh, ordered him to enter defence.
He said a prima facie case was established against him by the prosecuting counsel, Mr Sylvanus Tahir.
Bello said that the “view of this court” after reviewing arguments by parties, “is that the application for a no-case -submission is lacking in merit. It is hereby dismissed.”
He thereby ordered Metuh to enter his defence and adjourned the trial until Nov 20 for the defendant to open his defence.
Metuh’s counsel, Dr Onyechi Ikpeazu, SAN, had on Oct. 10, 2017, told the court that they would enter a no-case submission at the close of the prosecution’s case.
Arguing in the no-case submission, Ikpeazu had told the court that the prosecution had not established any case to warrant the defendant to be called to enter his defence.
He said that the application was in pursuant to the provisions of Sections 302 and 357 of ACJA.
The counsel added that the defendant had a constitutional liberty and could not be prosecuted where he either refused to make a statement or withdraw any part of his writing in the course of making a statement.
Ikpeazu said that the defendant also had a right to cancel any part of his statement voluntarily.
He reminded the court that the charge by EFCC was that Metuh destroyed his statement and obstructed EFCC officials by willfully tearing his statement.
Ikpeazu argued that a piece of paper not signed did not qualify as a statement by the defendant, and urged the court to discharge and acquit the defendant.
However, the prosecuting counsel Mr Sylvanus Tahir, urged the court to establish whether or not a prima facie case had been made against the defendant
Tahir added that cancellation was different from tearing which was obstruction, and prayed the court to call upon the defendant to enter his defence.

0 Response to " EFCC: Case against Olisa Metuh hits another huddle "